Some of our student and staff physiotherapists supported world-class athletes competing in the recent Commonwealth Games 2022 in Birmingham (28 July - 8 August). Physiotherapists played a significant part in the successful delivery of the Games, with volunteers treating both athletes and spectators. Find out who at Winchester played a part and how in our latest blog post.

A month before the Commonwealth Games began, Fijian Commonwealth and Olympic swimmer Cheyenne Rova was attending a training camp at the Winchester Sport and Leisure Park at Bar End, when she started to develop shoulder pain that prevented her training. 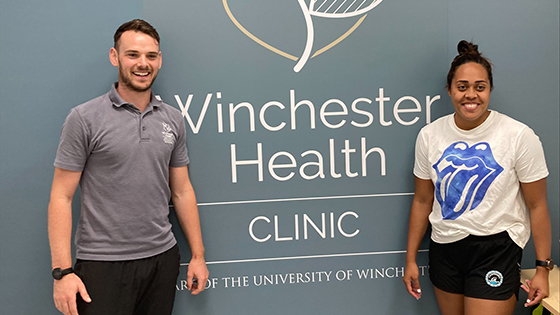 On behalf of the University's Winchester Health Clinic (based in the Leisure Park) first-year BSc (Hons) Physiotherapy students Josh Jones and Ellie Gribben undertook an initial assessment with Cheyenne to gain an insight into her training schedule and current physical function, as well as starting to hypothesise what her injury might be.

With the support of Winchester Health Clinic Manager Liam Newton, Cheyenne was further assessed and a treatment plan was developed to help get her back to fitness.

Liam said: "As the start of the Games was so close, we were able to see Cheyenne weekly over four weeks during which Josh and Ellie assisted in the progression of her treatment and got her back to being able to swim pain free.

"It was a fantastic opportunity for both of them to see the demands and commitment of an elite swimmer prior to a major sporting competition."

"Sadly, Cheyenne did not win a medal, but to have even got to the Games is a huge achievement given that she was unable to swim a month before. That said, this was a unique experience for two of our first-year Physiotherapy students," he added.

Ellie said: "Treating Cheyenne as a professional swimmer was a great experience to have as a student in physiotherapy. It gave me an insight into how I would approach a more advanced case in the elite sporting field as a physio in the future."

The Winchester Health Clinic has been set up by the University of Winchester to provide high-quality physiotherapy assessment and treatment to the local community. Undergraduate students on the BSc (Hons) Physiotherapy degree programme work alongside Health and Care Professions Council-accredited (HCPC) Physiotherapy practitioners in the Clinic during placements as part of their studies. 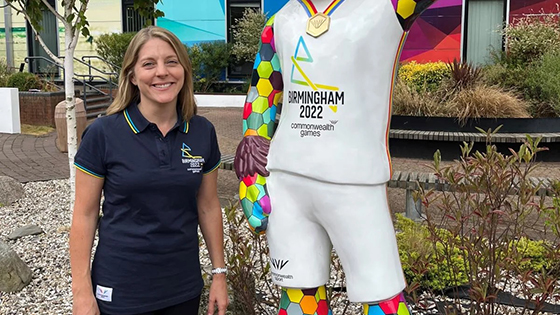 Physiotherapy lecturer Karen Chapman has recently returned from the Games where she was a venue medical manager (VMM) overseeing the medical teams at the National Exhibition Centre complex, which saw athletes competing in boxing, badminton, table tennis, para table tennis, weightlifting - including para powerlifting - and netball.

As one of a team of VMMs, Karen helped ensure everything medical ran smoothly, including making sure the right volunteers were on shift, sharing information with them and working closely with the ambulance service. The medical teams included physiotherapists, doctors, nurses, paramedics and sports massage therapists, providing treatment and cover for the field of play.

Karen has previously volunteered as a physio at the London 2012 Olympic Games, the Commonwealth Games 2014 in Glasgow and the 2017 World Athletics Championships.

"This role was different as I wasn't doing 'hands-on'-physiotherapy as in my previous volunteer roles," explained Karen. "I really enjoyed the VMM role as I learned much more about what happens behind the scenes when delivering a major games. I've previously worked on the women's international tennis tour which gave me some insights into running sporting events but, as a multi sports event, the Games were on a much bigger scale."

Fellow Physiotherapy lecturer Philippa Beaumont also worked at the Games as one of nearly 300 physiotherapy volunteers, providing physiotherapy services to some 4,500 athletes. Working at the competition venues and three athletes' villages (Birmingham and Warwick universities and a hotel at the National Exhibition Centre) their other duties included maintaining clinical records and following medical policies and procedures.