Pauline Braun, a student studying on the MSC Animal Welfare, Ethics and Law programme, describes how - having outgrown the University's small pond - five carp were resettled in a much larger pond at Basingstoke Crematorium, thanks to her campaign and Head Gardener Maurice James and his team.

My name is Pauli and I'm a distance learner studying the MSc in Animal Welfare Science, Ethics and Law. I am fascinated by fish and find their mysterious underwater lives give rise to many questions and riddles.

Earlier this year, I visited the King Alfred Quarter and noticed that the fish in the pond had outgrown their environment. Together with fellow students, as well as Animal Welfare Lecturer Jenny Mace and Centre for Animal Welfare Director Professor Andrew Knight, I launched a campaign for the fish to be rehomed. Relocation became possible thanks to the wonderful support of University management, including Vice-Chancellor Professor Joy Carter.

"The relocation went very well, it was a very warm, nice day. After having to drain at least half of the pond here, catching the fish went better than expected. After leaving the fish in their containers for approx. 20 minutes, they were all released without any hitches and swam away."
Maurice James, Head Gardener. 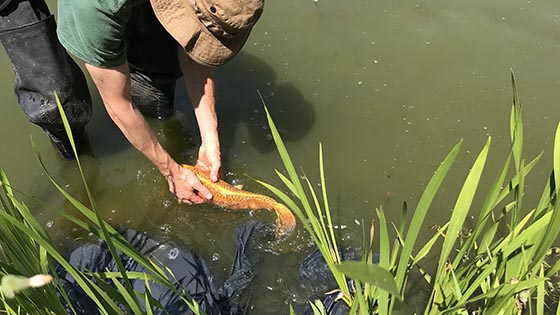 Mark Blake, Ground Supervisor at Winchester, releasing one of the carp into the lake at Basingstoke Crematorium, July 2020. Photo by Maurice James

Is fish welfare an issue?

Around the globe, legislative standards in fish welfare are comparatively low. Although public interest in fish and concern for their welfare appear to have increased over recent years, fish are often still denied even minimum welfare measures. The perceived necessity of protection is still influenced by how similar an animal appears to us humans. Clearly, when considered in this way, fish do poorly.

However, there seems to be an immense gap between the general public's perception of fish and reality. Fish are, indeed, sentient beings, that engage in complex social interactions, form friendships and experience pain in pretty much the same way as we do.

In stark contrast to the allegedly poor 'goldfish memory', numerous fish species are known to retain memory about breeding places or aggressive encounters with other fish, and this can last for many years. And did you know that fish communicate with a large variety of sounds? Their repertoire comprises pops, clicks, whistles, purrs, growls, barks, hums, hoots and rattles, just to name a few. Also, many fish species are 'tetrachromats' meaning they can see greater colour diversity than the average human. On top of that, fish are known to engage in highly complex behaviours such as tool use and even teamwork.

For these and many other reasons, fish deserve our protection - in legislation, as well as in our own homes and backyards. So, if you happen to have a pond with fish, please make sure they have sufficient space and lots of enrichment - after all, fish are highly curious beings.

Maybe you've heard that a fish will only grow to the size of its pond and that keeping fish in quite small water bodies is therefore not a problem. This is a common misconception. When kept in undersized ponds or tanks, fish will develop severe health issues, for example stunted growth and diseases or the fish might just die before reaching their normal full-grown size.

Psychological aspects also need to be considered. Imagine yourself spending your whole life in a small bathroom. Even if you receive regular food deliveries and have access to sanitary facilities, you would probably still go crazy within a very short time. And now imagine several other people in that same room with you!

But how can you tell if your fish have too little space? Smelly water, excessive growth of algae, as well as stressed or fighting fish are just some indicators which should get the alarm bells ringing. Be sure to get an expert opinion whenever you are in doubt about whether your fish have all they need. After all, if we keep fish in our home, it's just like with other pets such as cats or dogs: we may greatly benefit from having them around but we also have a great responsibility to take proper care of them.

And how are our campus fish doing now in their new environment? Mark Blake, our Grounds Supervisor, visited the site two weeks after rehoming and was happy to see that the five carp were doing very well and still swam together as a group in the large pond. 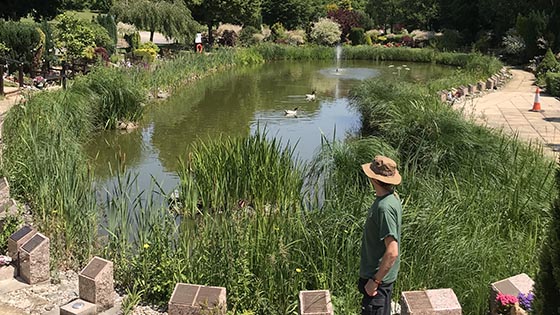 In the MSc Animal Welfare Science, Ethics and Law we learn a lot about psychological states and behaviour of animals as well as their species-specific needs and about welfare issues where those needs are not met. The content of the course makes us become more sensitive to welfare issues when we encounter them.

Most of us studying on the MSc programme want to make the world better for animals, and by working together as a group with our lecturers and other University staff, we were able to bring about positive change, for the lives of these fish.

If you spot something that doesn't seem right, where animals or people are suffering, then with the application of reasoned argument, and persistence, sometimes you really can make a difference.