Winchester: On screen and on page

A: When it is doubling as Paris, London, Oxford, the Vatican or a fictional land in a film, TV show, or book.

This week we’re celebrating that our lovely city consistently plays a part in literature, TV and films whether Winchester is where they’ve been written, set or filmed.

If you’re partial to a historical drama…

The Last Kingdom by Bernard Cornwell

Recently adapted into a hugely successful Netflix series, The Last Kingdom is part of Cornwell's The Saxon Stories, which follows Uhtred of Bebbanburg in the ninth and tenth centuries. Much of the story is based in Wintanceaster (now Winchester), where King Alfred ruled Wessex. In fact, a University of Winchester historian was a historical advisor for the television series.

The Pillars of the Earth by Ken Follett

Religion, monarchy, family power struggles and architecture all in epic proportions- what more could you want? Get wrapped up in the drama of this intense historical novel that features characters visiting Winchester from the nearby fictionalised town of Knightsbridge.

The Hollow Crown: The Wars of the Roses (dir. Dominic Cooke)

The final series of BBC Two’s adaptation of Shakespeare’s history plays was reason enough for Benedict Cumberbatch to stride around Winchester’s Great Hall in his turn as Richard Duke of Gloucester. A stand-out British cast with stellar filming locations, if we do say so ourselves…

The miniseries adaptation of Hilary Mantel’s novels saw Winchester Cathedral, the Great Hall and the Hospital of St Cross take to the small screen. Our fair city served as the backdrop for Clare Foy, Damian Lewis and Mark Rylance bringing Sir Thomas Cromwell’s ascent to life. If you get really into it, Winchester City Council have made a handy Wolf Hall tourist trail so you can really Tudor yourself (sorry).

The Crown (created by Peter Morgan)

Dan Brown’s pseudo-historical fiction/detective/thriller/mystery,/worldwide bestseller enraptured cinemas thanks to a multitude of locations, including our very own Cathedral again, this time standing in for none other than the Vatican. Standard.

If you’re sharpening your pencils and excited about hitting the books...

Winchester College, the boys public school that has only been around for 623 years, rivals Martin Clunes for the top billing in this sentimental adaptation. Beloved schoolmaster, tender romance, reflections on the futility of war; dewy-eyed viewing.

The No-Show By Beth O'Leary

If you're looking for a rom-com with a big twist at the end, O'Leary's The No-Show is the perfect indulgent read. The story follows three different women who are all stood up by the same man on Valentine's Day. A lot of the book is set in Winchester where a few of the characters live and even references the delicious pancakes at Josie's cafe. If you fancy walking the pathways of the city whilst listening to the story, we highly recommend downloading the audiobook as it has Evanna Lynch (Harry Potter) and Luke Thompson (Bridgerton) narrating.

Jack Whitehall trades standup and comedy panel shows for a role as young teacher Paul Pennyfeather in this recent BBC adaptation of Evelyn Waugh’s novella. Not only did he get to fall in love with Eva Longoria, he got to film in Winchester College and Kingsgate Village in Winchester – both equally appealing undertakings.

The Great Hall and Winchester college moonlight as Oxford in this film where Sam Claflin, Max Irons and Douglas Booth join a secret university dining society. Watch it for its location, not the horrendous actions of its spoilt, nasty characters. 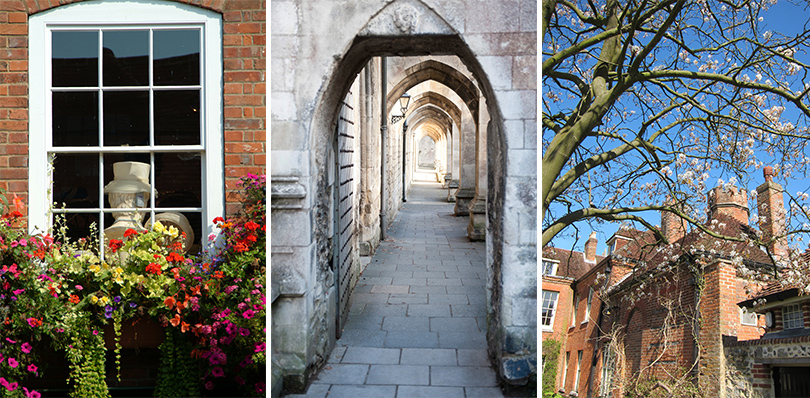 ‘To Autumn’ by John Keats

Keats’ sublime seasonal ode was composed here in Winchester’s gorgeous water meadows. Be sure to take a stroll there in the autumn while uttering under your breath about the ‘season of mists and mellow fruitfulness…’ Feel clever yet?

The above were written or edited either at her house in Chawton (about 20 minutes outside Winchester) or from her final residence in a butter-yellow house on College Street, proving Hampshire was a rich crucible for Jane Austen to produce what ended up being some of the world’s most well-read novels. Winchester loves its adopted daughter. We have a special trail you can follow, we have her famous quotes appear on the city’s pavements when it rains as part of the #RainJane project and you graduate in the building that is her final resting place. It is a truth universally acknowledged that this all makes Winchester pretty wonderful.

‘The Adventure of the Copper Beeches’ by Sir Arthur Conan Doyle

Mr Holmes and Mr Watson get called out of London to help a girl working as a governess in a job with some pretty weird provisos. Where, pray tell, do they have to venture to provide their famously infamous service? Winchester, of course, where they stay in the Black Swan Hotel on Southgate Street. Other cities wouldn’t ever dream of putting up a plaque indicating the real location where fictional characters stayed, but in Winchester it’s elementary.

Tess of the D’Urbervilles by Thomas Hardy

It doesn’t take a literary genius to figure out that the enigmatically-named Wintoncester in Hardy’s classic is a version of Winchester. A connection slightly more nuanced is that between the spire of the Victorian St Thomas’ Church and Hardy’s mention of it.

Javert (Russell Crowe) dramatically pursues Valjean (Hugh Jackman) and Cosette down the cobbled streets of revolutionary Paris to the impressive city gates. Well he doesn’t – those streets are all located around College Street and the gate is Winchester’s own Kingsgate. Similarly at the end of this upbeat, feel-good musical Hugh Jackman takes his final, hauntingly melodic breath in the Chapel at Winchester College just a few streets over.

If you’re after some comedic relief after watching a movie whose title literally means ‘The Miserables’...

John Cleese, Jamie Lee Curtis, Kevin Kline and Michael Palin share centre stage with the animals of Marwell Zoo (located just outside Winchester) in this gloriously silly, farcical romp through the world of zookeeping; yep, just as high-brow as it sounds.