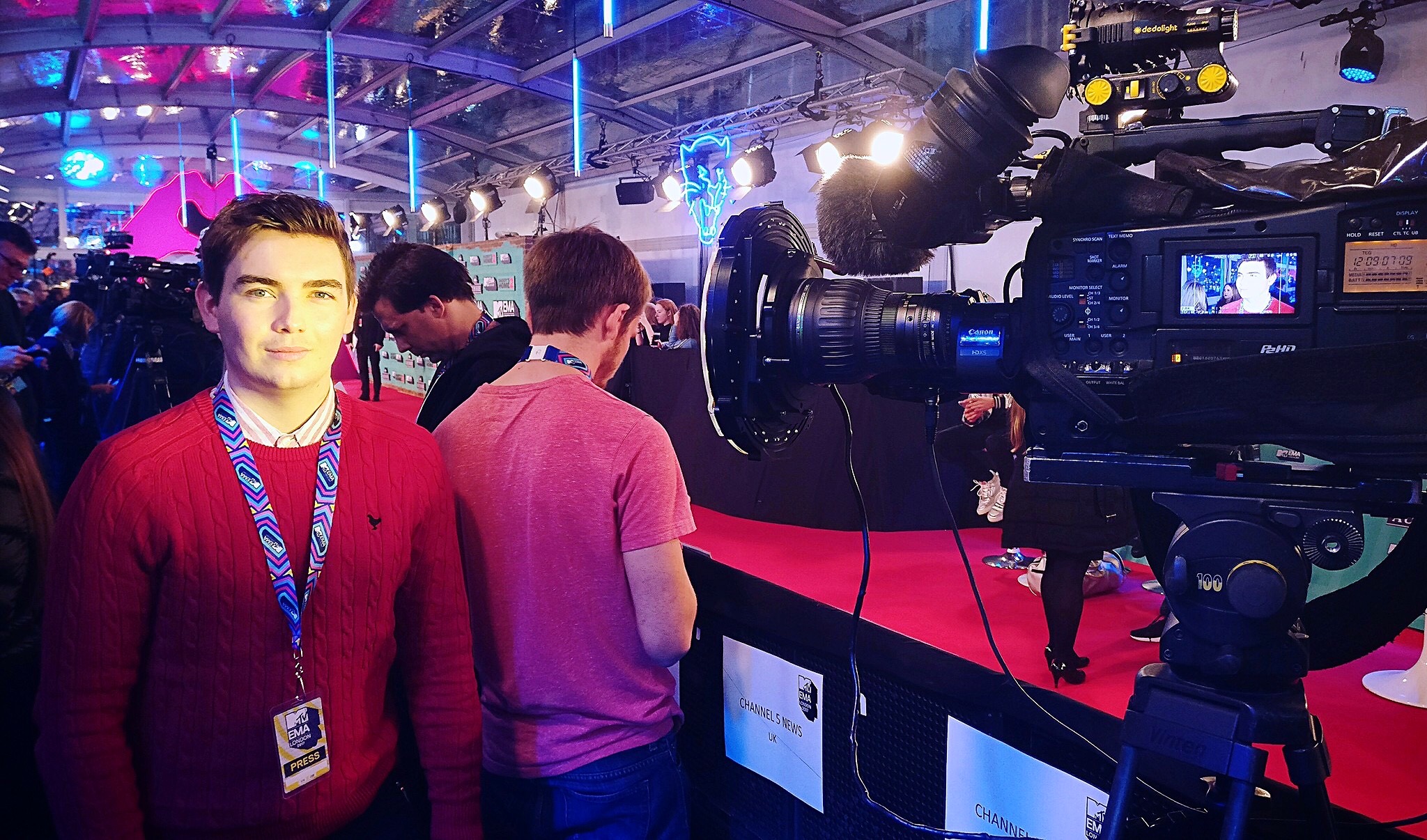 “Be around when stories break and put your hand up with ideas, say ‘I think we should do this, here’s an example of how I’ve done something similar before’. You need to make your own luck and the more willing and able you are, the more opportunities will arise.”

Matt Spencer has gone from having coffees on campus to coffees in some of the country’s largest newsrooms.

After graduating with a First Class (Hons) in Journalism in 2014, Matt has worked for both the BBC and for ITN, a company where he has now worked for over six years with Channel 4 News and 5 News. However the hard work didn’t start there for Matt because part of his Journalism degree at Winchester had him working as a reporter and editor from the very first lecture.

“The word ‘after’ on the course is never a thing. The degree is created so you can get a job straightaway. From day one, it’s all work experience – you’re building a portfolio of stories, contacts and reliability. Your degree is really a great opportunity to help pitch and sell yourself to an Editor. Even in Year 3, when you’re meant to be run off your feet with studying, the course allowed me to concentrate on work that would help me get a job and not just a piece of paper.”

Matt spent a lot of his own time filming events around the campus such as live music performances. He also found work with the BBC during the 2013 Local Elections and presented a two-hour live coverage of the 2012 US Elections titled America Decides.

“Filming around campus and taking on work that wasn’t specific to the course helped develop a wider range of skills and showed a lot of flexibility - all these skills translate into being able to say yes to different shifts and adapt in jobs.”

“You’ve got to learn how to react to things quickly, solve problems, and do things quite last minute. I created a documentary in nine days for my final year project and this was something I could show to an employer as actual experience. No one asks for your grades, it’s about what work you’ve done, how you solved problems, your contacts book, your ideas and your reliability.”

Matt was frequently taking part in work placements throughout his degree for places such as the BBC and The Sunday Times. However, once he graduated, Matt looked for paid opportunities and found himself commuting to London for freelance work regularly. He freelanced at several places, including local BBC radio, Good Morning Britain and ITN Productions eventually moving to London where he split his time between Channel 4 News and 5 News.

“I knew if could get enough regular shifts I could afford to move to London and it felt like the right thing to do. I picked up a lot of skills and knowledge working at different places, and I tried to have coffees with anyone who’d talk to me to make contacts. If someone is offering kindness don’t turn it down, you’ll meet lots of people this way. “

Having regular freelance shifts and saying yes to everything meant Matt was constantly around national newsrooms in the heart of current affairs, so when stories broke he could confidently offer his skills to a range of roles. This was especially apparent in 2017 when there was a spate of terror attacks, a general election and the Grenfell Tower tragedy. Matt was covering the stories for both broadcasters as they broke right in front of him. He was able to see the Grenfell Fire from his flat and called into Channel 4 News where he was booked the following day.

“Both news companies are based in London and the breaking news story was there. I messaged and said ‘I can see the fire, do you want me to head into the newsroom now?’ It was around 3-4am and I was sat making calls to the police by 4.30am, logging and editing footage, helping direct crews and reporters as the story was developing on the ground. I can’t remember when I left the newsroom – if it was the same day or the next – but that shift is definitely one I won’t forget.”

Matt was happy freelancing but after this coverage he was offered a job at Channel 4 News with their digital team. At the same time, 5 News offered to create a role for him that gave him a bit more freedom to develop.

“I realised if I wanted to progress I had to pick one. I stuck with 5 News. It’s honestly the loveliest newsroom you’ll find and they’ve always given me opportunities. I learned a lot from freelancing and would recommend throwing yourself into every chance you get, from interviewing dogs to potential Prime Ministers.”

“A year into the new role, 5 News put an incredible amount of trust in me and gave me a contract as News Editor to cover maternity leave for six months - this turned into twelve months, then eighteen. So, aged just 24/25 I was leading a national newsdesk, something the lecturers at Winchester were happy to hear about.”

Matt has since been able to help a number of Winchester students find work experience placements and shifts with ITN. During the lockdown he was able to hire a second digital producer to look after social media accounts while he was working from home.

Since building on his career at ITN, he has a lot more stance to make decisions. Now that Matt has his own years of experience, he has advice on how to make an impression in the newsroom.

“Showing an interest in lots of different aspects of the job will help. Try to spend time talking to people and learning from them - whether they’re the reporter, the camera crew or the person who looks after finances.”

“Be open to adapting to different software on your free days and try to add to your own skills. Read and watch coverage you wouldn’t normally be interested in - see how they do things differently and think ‘why?’ In Journalism we like talking, so don’t be afraid to ask questions, to pick up the phone or to pitch ideas – and when an opportunity comes your way, which it will, be the first to stick your hand up.”