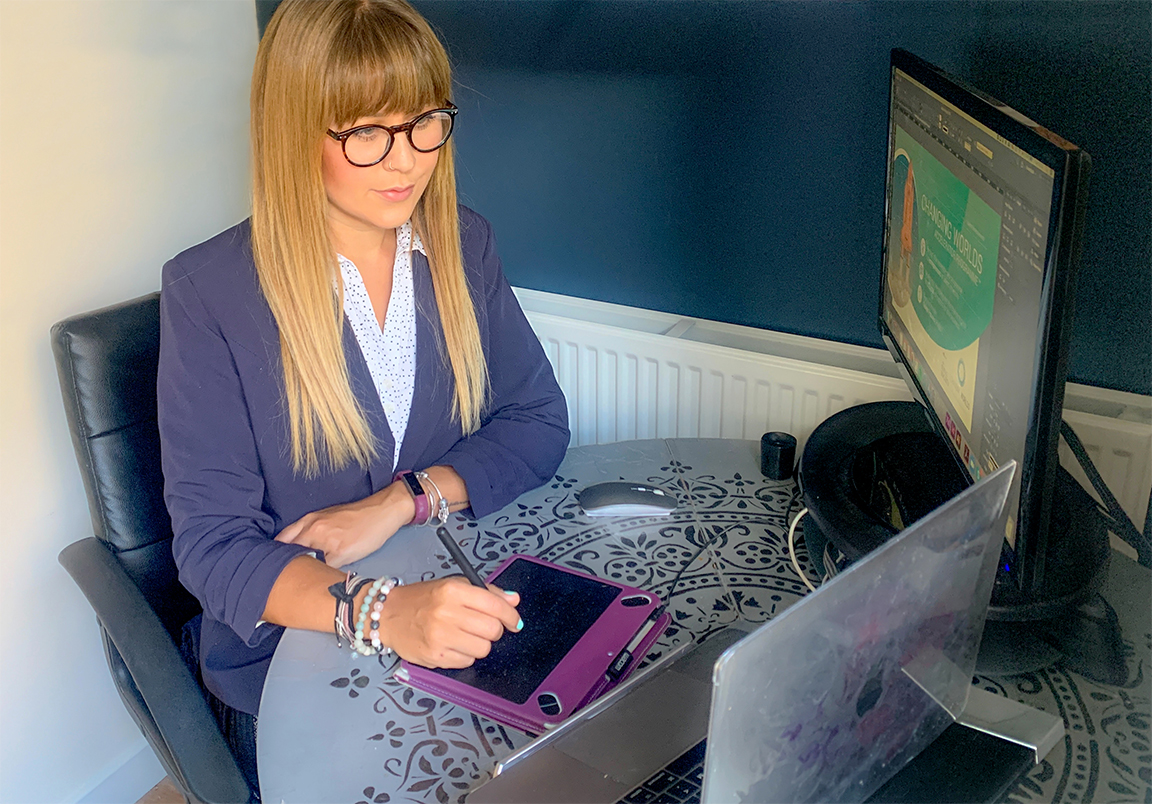 “After graduating I stayed and worked in Winchester and then moved to Southampton. I have found the place I want to work and live because of uni.”

Georgia Pullen has gone from studying English to working in design and communications. After graduating with a BA (Hons) English Language and Creative Writing degree in 2015, Georgia went on to work in graphic design, a very different discipline to her studies.

Georgia has since combined her skills of graphic design and English language in her role as Design and Communications Executive at LendingMetrics, a credit reference technology company based in Whiteley. Alongside working, Georgia studied a Masters degree in Visual Communication at Solent University and graduated last year.

“I took an interesting route in terms of getting my job. My career goal was to become a graphic designer, but I wanted to study something more academic en route and I really enjoyed my undergrad at Winchester.”

“Now I’m in a design career after finding my own way while developing my graphic design skills on the side while I studied. I worked in a creative role as part of the Graduate Intern Scheme at Winchester University, took a diploma in design and then worked in an architecture practice as a graphic designer.”

“I continued to do freelance work and got my current role in which my undergrad experiences come into play. It was a role created for me because of what I do for my company.”

“I design marketing campaigns and write for our social media and press releases, using the skills and experience I gained from my degree to help me in my new role. I’m keen to stay with my company for the foreseeable and look forward to seeing how my role will play out.”

“I still enjoy doing freelance work because it means I work with all different kinds of brands and that keeps things interesting.”

Georgia credits her degree for giving her the writing skills needed to work in her current role.

“We are thinking about writing more about our research, so my transferable skills such as knowing how to research properly and write effectively will be really useful.”

Georgia is happy in her new job and wants to see how she will develop further in this role.

“I want to see where my new role goes as I have a lot of input in how it is structured. I’m really grateful to my company for how they have supported me in my continued learning.”

During her time at Winchester, Georgia was an academic representative for her degree. This gave her the chance to gain transferrable skills and voice the opinions of her peers in a professional setting.

“I was a Student Academic Representative (StAR) for my course and that was interesting as I was helping to shape the course. Being a StAR also helped with my transferable skills because I was relaying people’s thoughts in a professional way.”

For Georgia, her best memory of university isn’t just one particular moment during her degree but the experience of becoming independent and self-sufficient. Georgia is originally from Suffolk but decided to work and live in Winchester after university.

“My best memories are my overall university experience of developing and being independent. I have stayed out in the working world since graduating. I didn’t go back home – instead I rented a room and saved for my own house in Southampton. I developed so much in my time at university, and found the place I want to live and work because of it.”

Having been in the working world since 2015, Georgia has some insightful advice for current students about the benefits of taking up different opportunities.

“Make the most of every opportunity. I wish I had taken more advantage of the opportunities at Winchester. I did get really involved during my Masters at Solent and I now mentor students who study on that course, so I would’ve liked to do those things during my undergrad. I’d definitely say make the most of all that is available to you.”