Two University of Winchester academics shared their knowledge of Anglo-Saxon history, culture and language in advisory roles for the latest instalment of the highly successful Assassin's Creed action role-playing video game, which has just been launched.

Assassin's Creed Valhalla, developed and published by game company Ubisoft, invites players to journey into the epic, rich world of a Norse Viking raider during the Viking invasions of England in the 9th century. As Eivor, players lead their clan on raids to find resources and treasure to build their own Viking settlement in England.

Ryan Lavelle, Professor of Early Medieval History at the University of Winchester and an internationally-recognised expert in Anglo-Saxon Winchester and King Alfred (pictured below), met with a group of Ubisoft games developers when they undertook a tour of historical places as part of their inspiration for the game. 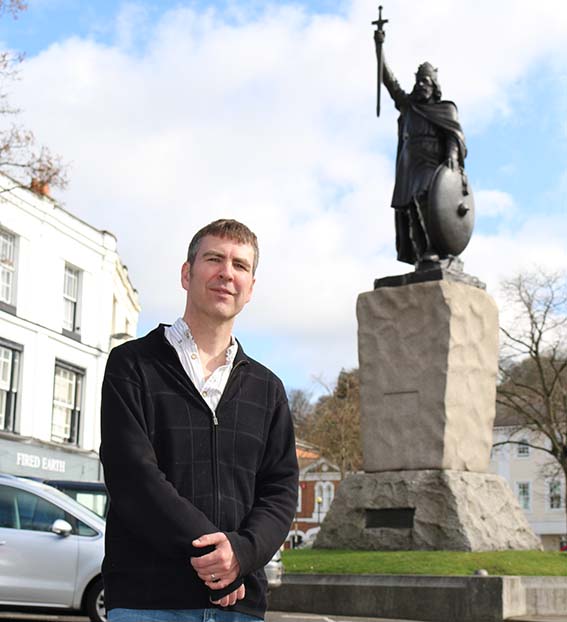 "Over two days my contribution was as their itinerant history teacher travelling to a few locations in our patch of southern England, of the kingdom of Wessex and King Alfred, including Stonehenge, the Uffington White Horse, Portchester Castle, and of course, Winchester, said Professor Lavelle.

"I was asked about many different aspects of life in England at that point in the Viking Age, from laws and government to the nature of the royal court. My job was made easier by the fact that there were many fans of TV drama The Last Kingdom in the crew, but it was the real history rather than the TV series or Bernard Cornwell's books that we were dealing with, and I made that my focus.

"Those two days were something of a whirlwind but my abiding memory was of sitting on the grass with the crew at White Horse Hill, Uffington. in Oxfordshire, pointing out the landscape below while getting buzzed by a drone which had been brought specially for the occasion - that incredible mix of tech and an ancient landscape."

Professor Lavelle, who has been an historical advisor on all four seasons of the critically-acclaimed drama The Last Kingdom, now on Netflix, also features in a podcast series associated with the game, Echoes of Valhalla, which is available on Spotify.

He helped to build the Wordsmith, a naming generator in Old English, which developers could click on to generate place names, personal names, and object names.

"Ubisoft wanted a 'playful' way of generating names and inspiration for naming things, people, and places, and so I created a database of name elements for this purpose, explained Dr Lacey.

Dr Lacey also recorded a series of interviews, to be shared throughout the company, on various aspects of Old English language, its contact with other languages, and life in early medieval England, such as their perceptions of their landscapes, their understanding of the supernatural, their 'learned' and 'folk' traditions, and day-to-day life.