Dr Steven McCulloch, Acting Director of CAW, has published two articles on Brexit, sentience and animal welfare. Sentience and animal welfare has received substantial media attention after Parliament voted against an amendment to the EU Withdrawal Bill tabled by Caroline Lucas MP. Dr McCulloch's first article, Brexit, Animal Sentience and Democracy, describes the moral atrocities committed against animals when their sentience has been denied. In the article he argues that the historical denial of sentience and its consequences in itself means that government should formally recognise it in law. The second article The Greatness Of A Nation Can Be Judged By How It Treats Its Animals is critical of the Conservative government policy to reject incorporating Article 13 in the EU Withdrawal Bill.

How clever are the animals we keep? World's first Professor of Animal Welfare, gives lecture at CAW event

Donald Broom, Emeritus Professor at the University of Cambridge (pictured above centre with Dr Steve McCulloch and Professor Joy Carter), gave a CAW evening lecture on How clever are the animals we keep? on 27 Nov 2017. Donald Broom was the first person to be appointed Professor of Animal Welfare in the world. Professor Joy Carter, Vice Chancellor at Winchester, introduced the CAW event, which was a great success. Over one hundred staff, students and members of the public attended. The video of the event is available to watch online here.

Dr Steven McCulloch, CAW Acting Director, gave a presentation at the Badger Trust 2017 annual conference in Preston. Dr McCulloch's presentation was entitled Would a virtuous government cull Mr Badger?. In the presentation, Dr McCulloch applied Animal Welfare Impact Assessment and ethical analysis to badger control policy options. His presentation, which was based on a set of five papers published in the Journal of Agricultural and Environmental Ethics, argued against the government policy of badger culling.

Professor Andrew Knight, CAW Professor of Animal Welfare Science, Ethics and Law has been awarded a Fellowship by the Royal College of Veterinary Surgeons (RCVS). The Fellowship was awarded for meritorious contributions to the veterinary profession, including the founding of the Centre for Animal Welfare at the University of Winchester. Congratulations Professor Knight FRCVS! 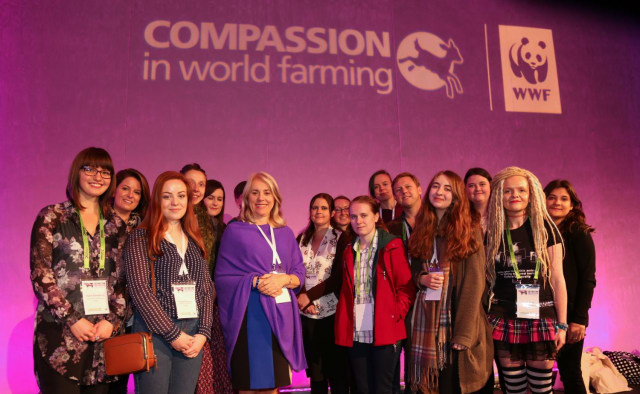 Staff and students at the Centre for Animal Welfare attended a major international conference in London 5-6 October 2017. The Extinction and Livestock event was organised by Compassion in World Farming (CIWF) and the World Wildlife Fund (WWF). Professor Joy Carter, Vice Chancellor of the University of Winchester, chaired the first session on Setting the planetary scene. Leading international speakers presented at the event, which investigated the links between intensive livestock farming, environmental destruction and biodiversity loss. During the evening event, hosted by Joanna Lumley OBE, CAW students met with Philip Lymbery, Chief Executive of CIWF and Visiting Professor at Winchester. The complete set of lectures delivered over the two day conference is available to view here.

The issue of welfare at slaughter has received a high media profile for the last few years. This is in large part due to exposes by Animal Aid of cruelty in a number of UK abattoirs. The current government has committed to installing mandatory CCTV in all abattoirs as a result. The issue of religious or non-stun slaughter​ continues to be highly controversial. Furthermore, there are major problems associated with conventional slaughter of pigs and poultry in particular. There is a growing consensus that carbon dioxide stunning of pigs causes severe respiratory distress. The electric parameters of water bath stunners of poultry are often insufficient for a full stun and chickens are electro-immobilised rather than rendered insensible to pain. Thus, millions of pigs and chickens endure suffering​ during the slaughter process.

Dr Steven McCulloch has published five papers on the highly controversial issue of bovine TB and badger culling. The set of papers, co-authored with Professor Michael Reiss (UCL) and published in the Journal of Agricultural and Environmental Ethics (Springer), are available to read open-access here. The research discusses the science, policy and politics​ of bovine TB and badger culling and argues for mandatory Animal Welfare Impact Assessment (AWIA) for all policy that significantly impacts animals, which are recognised as sentient beings.

McCulloch and Reiss argue that controversial policy issues such as badger culling should also be informed by robust ethical analysis conducted by independent experts. In bovine TB policy, application of AWIA reveals badger culling involves killing five badgers to prevent the slaughter of one cow. Using established moral frameworks​, McCulloch and Reiss argue that, considering impacts on humans, cattle and badgers, non-culling policy options, including improved cattle-based controls and the vaccination of badgers, are superior to badger culling.

Dr Steven McCulloch, Acting Director of the Centre for Animal Welfare and Lecturer in Human-Animal Studies, looks at the US Court of Appeal Naruto vs David Slater case and its relation to the animal rights debate. Read the full blog post here.

Congratulations to Christina Nellist for successfully defending her PhD thesis 'Ancient voices in modern theology. Orthodox theory and practice: animal suffering and welfare'. "Christina’s research on theology and animal welfare is immensely important and we wish her every success in the next stage of her career," commented Dr Steven McCulloch, Acting CAW Director.

Political party manifestos: what do they pledge on animal welfare policy?

In light of the general election on 8 June, Dr Steven McCulloch, Lecturer in Human-Animal Studies and Acting Director of the Centre for Animal Welfare, looks at the policies related to animal welfare set out in the political parties’ manifestos. Read the full blog post here.

Was Jack the Ripper an abattoir worker?

The identity of Jack the Ripper remains one of the greatest unsolved crime mysteries in history. Jack was notorious both for the brutality of his murders and for his habit of stealing organs from his victims. His speed and skill in doing so, in conditions of poor light and haste, fuelled theories that he was a surgeon. However, re-examination of a mortuary sketch from one of his victims has revealed several key aspects that strongly suggest he had no professional surgical training.

A recently published groundbreaking article, co-authored by CAW Director Professor Andrew Knight and historian Katherine Watson, argues that the technique used was more consistent with that of a slaughterhouse worker. The article considers the implications for modern animal slaughtering, and our social reliance on slaughterhouses.

Click here to read 'Was Jack the Ripper a Slaughterman? Human-Animal Violence and the World’s Most Infamous Serial Killer', as published online in Animals.

A recent publication on vegetarian pet diets by CAW PhD student Madelaine Leitsberger and CAW Director Professor Andrew Knight has performed above all expectation. Despite only being published on 21 September 2016, it was the most downloaded article (and had the greatest number of abstract views of all articles) published in the journal Animals during 2016. Animals is a leading journal in the animal welfare field.

On 16 March 2017, Compassion in World Farming Director and CAW Visiting Professor Phil Lymbery presented Dead Zone: Where the Wild Things Were. In this lecture, based on his new book of the same title, Philip Lymbery toks us on an illuminating investigative journey across the globe, focussing on a dozen iconic species to understand the role that industrial farming is playing in their plight.

Today many animals face extinction – and it’s not only climate change and habitat destruction that are to blame. The impact of consumer demand for cheap meat is equally devastating. We are falsely led to believe that factory farming and the use of pesticides are necessary evils. However, as our planet’s resources reach breaking point, awareness is slowly building that the wellbeing of society depends on a thriving natural world. This lecture was a passionate wake-up call for us all, laying bare the myths that prop up factory farming before exploring what we can do to save the planet with healthy food.

Professor Lymbery’s presentation was be followed by a discussion about the findings in the book Dead Zone with Professor Andrew Knight, Director of the Centre for Animal Welfare, and a Q&A session.

Yesterday, MEPs voted overwhelmingly in favour of species-specific legislation in a plenary vote; they urged the European Commission to begin the process of drafting legislation that would phase out, and ultimately ban, the use of all cages for farmed rabbits across the EU.

Read the full article on the Compassion in World Farming website.