2019-20 news and events from the University of Winchester's History Department, its research projects and research centres, the Wessex Centre for History and Archaeology, Centre for Medieval and Renaissance Research, and Modern History Research Centre

All WCHA seminars are free and open to anyone. They are held on Wednesdays at 6pm and are online. Please contact Dr Simon Sandall to register your interest. For more information about the WHCA, visit the Wessex Centre for History and Archaeology webpage.

This year, our annual participation in the Winchester Heritage Open Days was extra special: this time our contribution to this annual festival of local and regional history was led and coordinated by students on the MA Cultural Heritage and Resource Management (CHaRM), as part of their course. And with virtual being the new normal, students and academics rose to the challenge, with a wealth of podcasts, virtual walking tours, interviews and webinars.

Missed them? Not to worry! Thanks to the virtue of virtual, all events have been recorded and are being made available via the University's YouTube channel and the Winchester Heritage Open Days' podcast channel.

Early medieval expert Prof. Ryan Lavelle has recently lent his expertise to the development of a popular historical video game. Assassin's Creed Valhalla, developed and published by game company Ubisoft, invites players to journey into the world of a Norse raider during the 9th-century Viking invasions of England. As Eivor, players lead their clan on raids to find resources and treasure to build their own Viking settlement in England.

In his recent post for Boydell & Brewer's Proofed blog, Prof. Ryan Lavelle places his new book Places of Contested Power, an exploration of how and why certain locations were chosen for opposition to power, in a wider, contemporary context. Read Prof. Lavelle's Proofed blog on Places of Contested Power and watch the video of him discussing the book.

In his Nov. 2019 Inaugural Lecture (see below), Professor Ryan Lavelle focussed on his then forthcoming book Places of Contested Power; for those who missed it, Prof. Lavelle's inaugural lecture is available on YouTube.

The History Department's Centre for Medieval and Renaissance Research (CMRR) teamed up with The Public Medievalist to organise an exciting conference, which took place on Twitter from 30 June to 3 July. The innovative conference The Middle Ages in Modern Games saw delegates present their papers in a series of 12 tweets, featuring such aspects as medieval source material, accuracy and authenticity, gender, magic, medicine and religion.

The 'proceedings' have now been published as an online booklet, with a foreword by conference organiser Dr Robert Houghton.

This nuanced study, rooted in the question of authenticity, sheds new light on the use and misuse of medieval history in modern media. Co-edited by Dr Robert Houghton and Winchester History PhD graduate Dr Karl Alvestad, now Associate Professor of History at the University of South-Eastern Norway, The Middle Ages in Modern Culture is due out in Feb 2021. 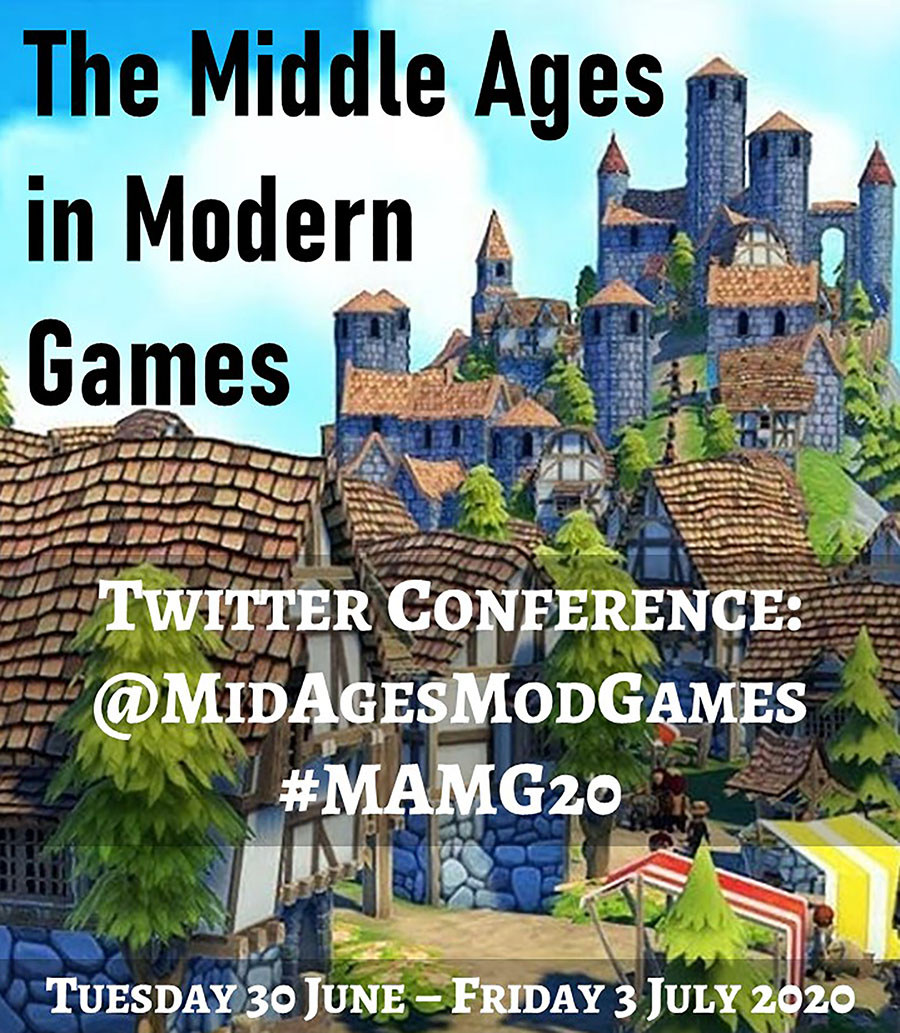 Dr Natalya Chernyshova, Senior Lecturer in Modern History, has been awarded a British Academy Mid-Career Fellowship for the project 'Petr Masherau: From Partisan to Party Leader in Soviet Belarus'. Petr Masherau was the charismatic leader of Soviet Belarus from 1965 to 1980. He presided over a period of unprecedented prosperity and stability in the republic, and his sudden death in a car crash in 1980 brought forth an outpouring of national grief - as well as rumours of Moscow’s involvement. His memory has proven remarkably enduring.

"My project offers the first scholarly biography of Masherau and, through his life and leadership, the first detailed exploration of late socialist Belarus, an important borderland republic of the Soviet Union", explained Dr Chernyshova. "Focussing on this under-researched ethnic periphery, the study illuminates how it responded to Moscow’s twin projects of building socialism and maintaining an empire. My book will contribute a completely new case study to the scholarship on colonialism, national identity, ethnic minorities, and modernity that would enhance our understanding of a strategically important region today."

We are delighted to announce the publication of the long-awaited Festschrift for our Em. Prof. Barbara Yorke. The Land of the English Kin: Studies in Wessex in Honour of Professor Barbara Yorke, edited by former Univ. of Winchester archaeologist Dr Alex Langlands and Prof. Ryan Lavelle, has been published by Brill. Costing over £100 in hardback, this wonderful volume is downloadable for free on the Brill website.

The Vikings: how they rose from raiders and marauders to lords and kings - and how they fell

In a new article in BBC History Extra magazine, Prof. Ryan Lavelle delves into the story of Vikings in Britain, from the early forays of seafaring raiders landing at Lindisfarne in 793 to battling Alfred the Great, and Danish warrior Cnut's triumph in claiming the English crown – and their abrupt ousting in the Norman Conquest of 1066. Read the full article about Vikings in Britain by Ryan Lavelle.

The Department of History is delighted to announce an exciting fully funded PhD studentship opportunity. 'The multiple identities of Mary II: queenship, culture and politics in the late 17th century' is a Collaborative Doctoral Studentship starting in October 2020 under the AHRC’s Collaborative Doctoral Partnership Scheme, in partnership with Historic Royal Palaces. Apply by 29 May (previously 8 May).

New books by our historians

This is the perfect book for writers of Roman historical fiction: covering everything from family life, food, clothing, entetrainment and travel to law and order, economics and religion. A must-have for every novelist, screenwriter, games designer or re-enactor, this fantastic book was an immediate sell-out on Amazon when it appeared in February. "They probably didn't stock up as I'm not Mary Beard", said an amused Dr Fleiner, "but I'll take my 15 minutes of fame where I can find it!". Listen to Dr Fleiner speak about the book in the History Hit podcast.

A wide-ranging and interdisciplinary examination of medieval manors, how their occupants used them and how this illuminates aspects of gender and authority before and after the Norman Conquest.

Ryan Lavelle, Places of Contested Power, Conflict and Rebellion in England and France, 830-1150

In his new book Places of Contested Power, Prof. Ryan Lavelle delves into the complex world of early medieval contested power, and the role of central places in the plotting, scheme and usurping aimed at seizing power and holding onto it. Prof. Lavelle, author of the award-winning Alfred's Wars, is the historical consultant for the BBC hit TV series The Last Kingdom, about the rise of King Alfred and the kingdom of Wessex, in which Winchester played a pivotal role. See also below, under Nov. 2019.

Gordon McKelvie, Bastard Feudalism, English Society and the Law: The Statutes of Livery, 1390-1520

Regulation of the distribution of liveries and the practice of retaining, which underpinned the so-called system of bastard feudalism in late medieval England, are the subject of this book. Rather than relying primarily on the records of noble estates, as much previous scholarship has done, it draws on the records of the court of King's Bench, covering all 336 known cases of illegal livery and retaining over 130 years.

In a recent trend in scholarship, ancient biographies are seen as literary modes. This e-book by Dr Paola Bassino provides a comprehensive study of the Certamen Homeri et Hesiodi, an influential ancient Greek text that narrates the lives of Homer and Hesiod and their legendary poetic contest. It offers new perspectives on the nature, uses and legacy of the text and its tale of literary competition. The commentary focusses on how the text characterises the two poets and encourages reflection on their respective wisdom, aesthetic and ethical values, divine inspiration and Panhellenic appeal.

On 27 November, our newly appointed Professor Ryan Lavelle delivered his Inaugural Lecture Seizing Power, Keeping Power, and Kicking up a Fuss in Early Medieval England and France. In a packed Stripe Auditorium, he delved into the complex world of early medieval contested power, and the role of central places in the plotting, scheme and usurping aimed at seizing power and holding onto it.

Both in England and in France, the early Middle Ages are full of episodes of rebellion and opposition by many parties with an axe to grind, whether disinherited royal sons or sidelined aristocrats. Royal estates and castles, and their position in the landscape, were actively used in these power struggles to make political points, like a language of legitimacy. Prof. Lavelle, whose two young sons were in the audience, had a vivid way of bringing this to life for his audience: "Some places are more effective than others if you want to get a point across. A stroppy child will instinctively kick up a fuss in a crowded supermarket - far more effective than an empty field." 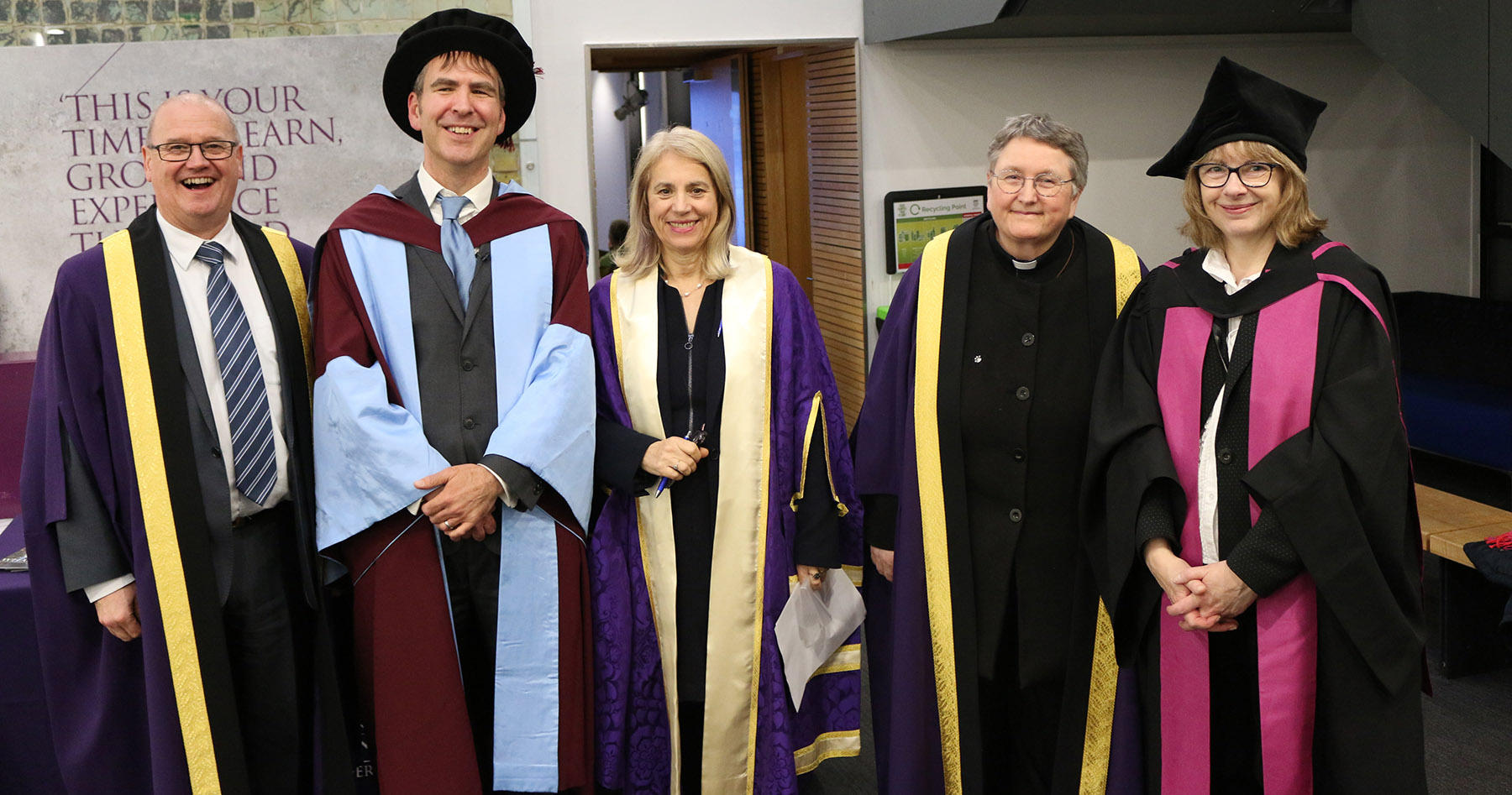 Professor Lavelle has built up an impressive public engagement track record since his initial studies at the University of Winchester on royal estates in Wessex, with frequent media appearances, popular articles, public lectures and conferences. He is also engaged in consultancy, as historical consultant for the BBC hit TV series The Last Kingdom, about the rise of King Alfred and the kingdom of Wessex, of which Winchester was the capital. He is the author of the award-winning Alfred's Wars; his forthcoming book Places of Contested Power will be published in 2020.

For those who missed it, Prof. Lavelle's inaugural lecture is available on YouTube.

The King Alfred Weekend is organised annually by local community heritage group Hyde900. This year's Keynote Lecture was given by Winchester medieval historian  In The descandants of the House of Wessex at war, Dr Weikert examined the crucial events during the 'Anarchy' in Winchester in 1141, when two 7x-great-granddaughters of Alfred the Great, the Empress Matilda and Queen Matilda, fought on opposite sides for the control of the country. Dr Weikert's new book, Authority, Space and Gender in the Norman Conquest Era, c. 900-c. 1200, will be published by Boydell & Brewer in 2020.

Statue of King Alfred the Great in Winchester

After many years, work has resumed at Clarendon, the grandest western royal residence in England during the medieval period, located near Salisbury. It was the country retreat of kings and queens, where they could indulge their passion for hunting, and the site of the start of the quarrel between Henry II and Thomas a Becket, Archbishop of Canterbury. Supported by Heritage Lottery funding, the new investigations are a collaboration between the Friends of Clarendon Palace, the Clarendon Park Estate, Historic England and a host of universities, including Winchester. On June 16th, there was an Open Day in nearby Pitton, showcasing the latest finds from the first phase of the excavations.

To find out more Clarendon and our investigations of this fascinating and important site over the decades, visit the project webpage on the Univ. of Durham website or the Clarendon Wikipedia page. 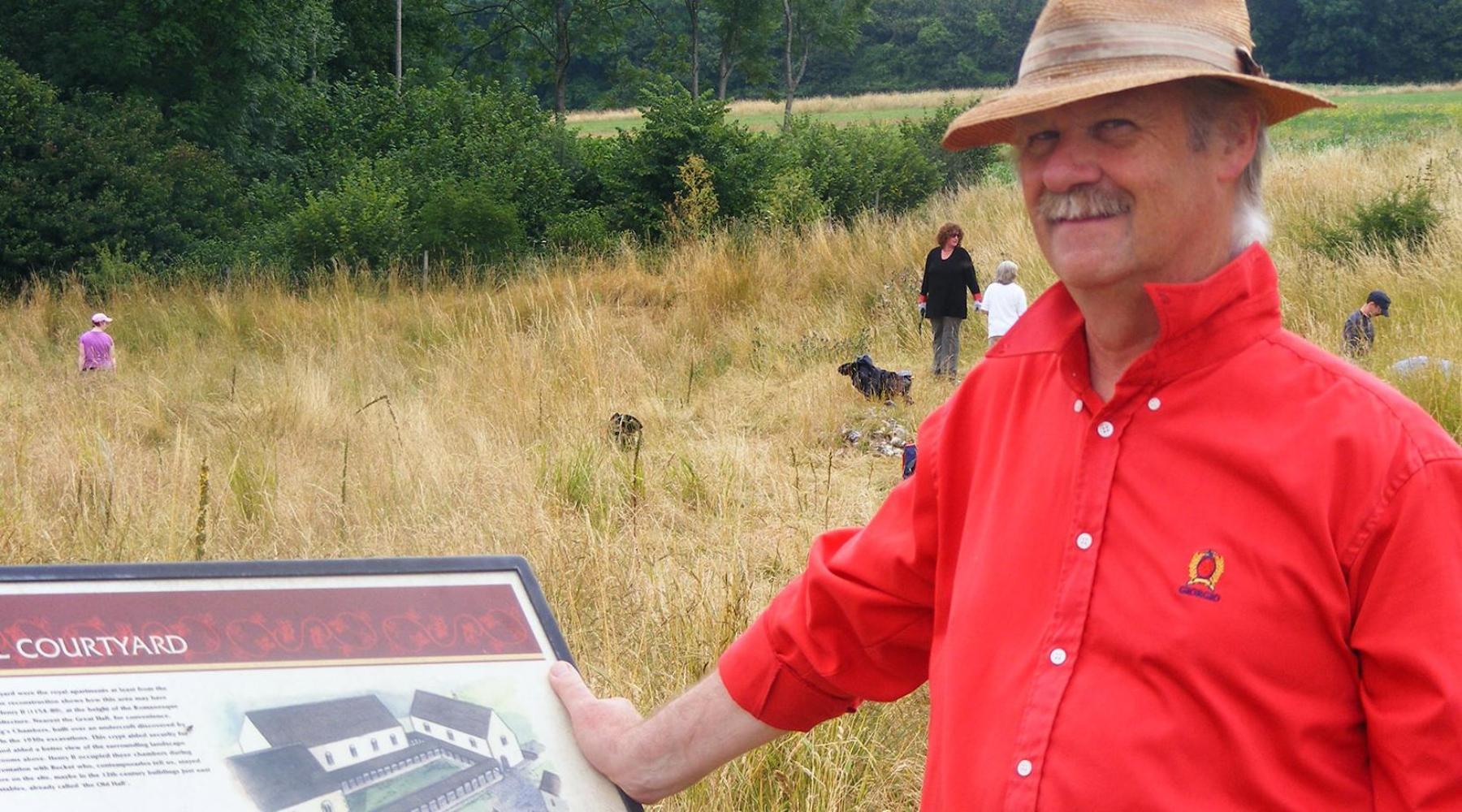 Emeritus Professor Tom Beaumont James MBE, co-author of the seminal Clarendon: Landscape of Kings (2007) and Clarendon Palace: the History and Archaeology of a Medieval Palace and Hunting Lodge near Salisbury, Wiltshire (1988). The reconstruction drawing on the interpretation board was done by Dr Phil Marter.

Funded by the London Society of Antiquaries and led by Dr Simon Roffey (photo), The Archaeology of Medieval Hermitages Project will provide the first ever archaeology of medieval hermitages and anchorite cells across Britain and Ireland.