Art and a Greek Taverna 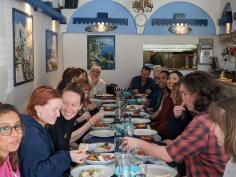 Our first Liberal Arts trip since the start of the pandemic took place this semester. Students and tutors visited the John Hansard and City galleries in Southampton followed by a beautiful meze dinner at the Blue Island Greek Taverna.

Of note in the City Gallery was a stunning exhibition by the artist Julian Perry 'who has created a series of new paintings that explore coastal erosion as emblematic of a world in crisis. The exhibition is a passionate response to Climate Breakdown and contains over 30 works by Perry as well as studies and found objects from eroding shores. Also included in the exhibition are works which have inspired Perry from artists including J.M.W. Turner, Gustave Courbet and William Nicholson. At the centre of the exhibition, Perry has created a 'secular alterpiece to the Assumption of CO2' which depicts scences of coastal erosion over four large panels which evoke the moetional drama of the Crucifixtion.'

We then enjoyed a stunning homecooked meze at the nearby taverna before getting back on the bus to Winchester. We'll be there again next year!!